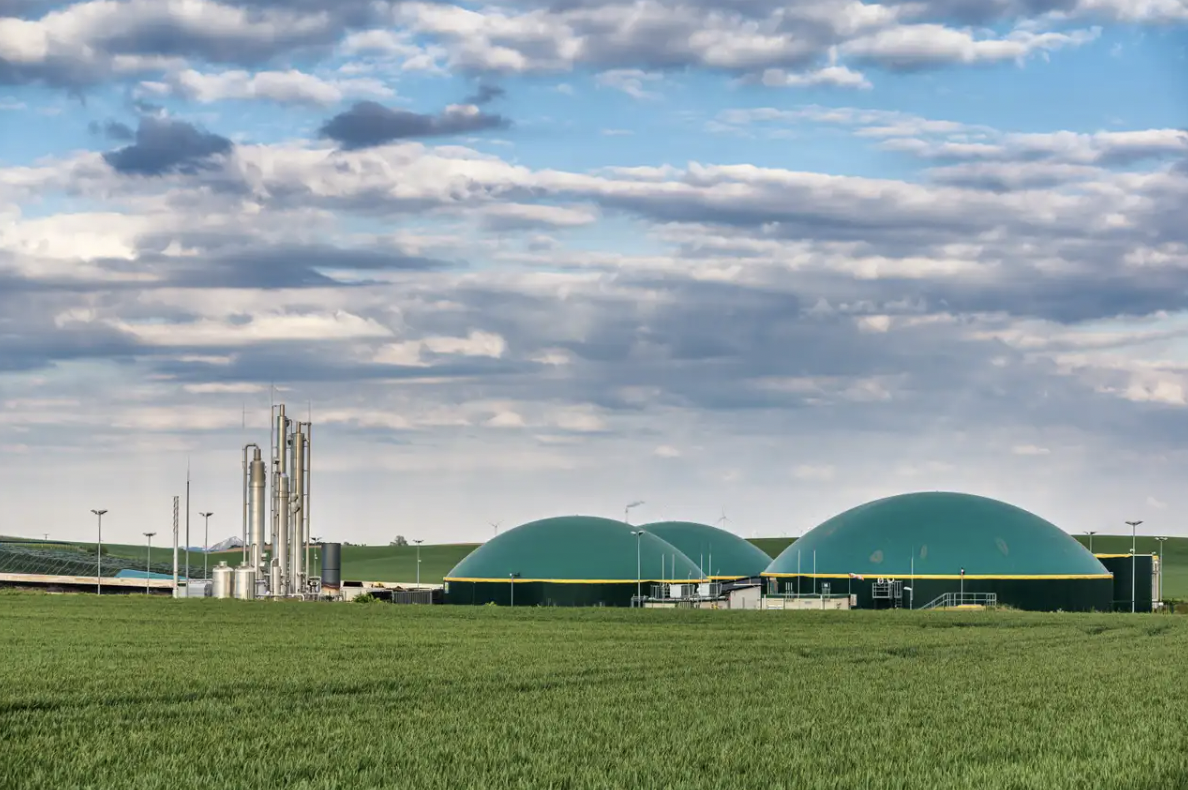 On a global scale, the largest RNG markets are currently North America and Europe with 80% of the global market share. Asia Pacific regions follow with a share of approximately 15% of the market. The global RNG market is expected to experience significant growth with a CAGR of 44% between 2023 and 2028. In 2021, the US renewable natural gas market contributed $2.6 billion to GDP and provided 22,600 jobs.

While RNG can be used in a variety of applications, one growing area of interest is fuel for heavy machinery and vehicles, with approximately 40% of natural gas vehicles using RNG as the primary fuel source. One application of using RNG to decarbonize vehicles is for public bus fleets. The image below depicts one example of reducing upstream emissions using RNG in California. With the growing recognition of RNG as a tool to drive deep decarbonization across the economy, both federal and state policymakers and regulators increasingly incorporate RNG as a prominent strategy to help achieve state climate, waste management, and other sustainability goals.

Presently, there has been legislation from Congress in the form of the Renewable Natural Gas Incentive Act of 2022, which specified that a tax credit of $1 per gallon of RNG for use in boats, motor vehicles, and airplanes would be in effect through 2032. State-specific legislation is evolving year over year, and we anticipate to see continued policy support as the pressure to decarbonize increases.

California is the first state to adopt a renewable gas standard in February 2022. California utilities will be required to supply an increasing percentage of renewable natural gas to their customers. Approximately 12 percent of gas usage in 2020 should be supplied by RNG by 2030.

To further incentivize pipeline injection, California Senate Bill (SB) 1383 directed California Air Resources Board to implement regulations to reduce CH4 emissions by 40 percent by 2030 as compared to 2013 levels. Given dairy farming’s prominent contribution to CH4 emissions in the state, SB 1383 included provisions directing gas utilities to implement at least five (combined total in the state, not per corporation) dairy-based RNG pipeline injection projects. The bill allows for “reasonable pipeline infrastructure costs” to be recoverable in the rates.

The House Bill 2580 “Promoting Renewable Natural Gas” signed in 2018 established a voluntary program that encourages increased production of RNG through sales and use tax exemptions and tools. The tax incentives can be used to purchase anaerobic digesters which facilitate the expansion and use of RNG. In May 2021, Washington state enacted HB 1091 enabling the implementation of an LCFS. Like California, RNG is also a low-carbon fuel that can be awarded tradeable credits.

Oregon has focused on RNG infrastructure development through cost-recovery measures for utilities which are constructing pipelines and purification facilities. The Oregon SB 98, enacted in 2019, allows natural gas utilities to make “qualified investments” and procure RNG from 3rd parties to meet portfolio targets for the percentage of gas purchased for distribution to retail customers. The RNG portfolio targets range from 5% between 2020 and 2024 to 30% between 2045 and 2050. Additionally, Oregon’s Clean Fuels Program seeks to reduce the CI of transportation fuels in Oregon. It functions very similarly to California’s LCFS and also includes approved pathways for RNG.

The Senate Bill 424, passed in April 2022, allows utilities to procure up to 5% of gas supplies from renewable natural gas and make upgrades to their distribution infrastructure to lower emissions. New Hampshire considers biomass and methane sources to be a Class III renewable energy source, which they aim to be about 8% of their energy mix in 2025 per New Hampshire’s RPS.

A few other states are shifting their perspective on RNG. New Jersey’s Bill A577, designed to promote the use of renewable natural gas, has been advanced. For Massachusetts, a climate bill signed in August 2022 would make biogas from certain anaerobic digestion and landfill gas facilities eligible to participate in the state’s Clean Peak Standard Program, which is designed to provide incentives to clean energy technology that can supply electricity or reduce demand during seasonable peak demand periods established by the Massachusetts Department of Energy Resources (DOER).

While today RNG a relatively small portion of the total energy mix, there is strong momentum and legislative support to increase its adoption as a clean fuel. RNG will play a major role in decarbonizing our economy, especially for hard-to-decarbonize sectors (e.g. industrial heat, residential space heating, heavy duty transportation, etc) where a drop-in, zero-carbon green molecule is the easiest and most economic attractive solution to fighting climate change.

A special thank you to Masters Associates Su Zhang and Rex Anderson for their help in writing this article.